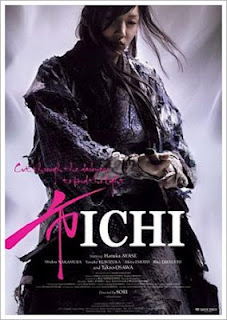 
As I've mentioned before, Samurai films are, by far, my favorite film genre. Chief among them (no disrespect to Kurosawa, who I adore) is the Zatoichi series (films and TV). They starred Shintaro Katsu, as Zatoichi, a blind masseur, who, like Caine, in Kung Fu, walked from place to place, meeting people, and getting into adventures. Seriously, he was also a master swordsman, who did travel, making his living giving massages, and gambling (dice). He usually ended up getting involved in some type of conflict, protecting the innocent, usually from the Yakuza, and correcting injustices. One of the movies was remade in 1989, as Blind Fury, starring the immortal Rutger Hauer. There was also a version released in 2003, starring the great Takeshi Kitano, in the title role.


Ichi is a homage/spinoff of that series. The main character is Ichi (not to be confused with Ichi The Killer), a blind musician, who, as an infant, was rescued by Zatoichi, and taken to live with a group of blind women. There, she lives, and was educated (Zatoichi would also visit her there, and train her to fight), until she was expelled after being falsely accused of having an affair, which was forbidden. Note: She is often addressed as "Goze", which was a title given to blind women. After her expulsion, she roams from town to town, searching for her mentor. Along the way, she makes a living by giving musical performances, and gambling (dice, as well).

The film opens with a Ronin (masterless Samurai) Fujihira Toma attempting to rescue Ichi from being attacked by a group of bandits. Instead, since he is incapable of drawing his sword, she rescues him. From there, they travel to a village, where she helps him win money playing dice, to replace some that he'd lost in his attempt to save her. Annoyed at Toma’s winning, and not giving them a chance to win back their money, bandits attach him and Ichi. Once again, Ichi saves him. A group of businessmen come upon the aftermath, and mistaking it as Toma's work, and hire him to be a bodyguard.

When a government official comes to visit, the village, hoping to gain some protection from him, puts on a show. During the show, the bandits attack, and to end it, Ichi offers herself as a hostage. Her real motive for doing so is that the leader of the bandits, Banki, a former Samurai, supposedly knows of Zatoichi's fate. This sets up the chain of events that lead to the climactic battle.

I really like a lot about this film, but have a few issues. It is beautifully produced and directed. The scenery and costuming are fantastic. The characters are appropriately cast, none of the actors seemed out of place. It also has the themes of courage, honor, and sacrifice, common to most films of this genre.

Haruka Ayase does an excellent job as Ichi. She gives an effective, but subtle performance. Ichi is appropriately sullen, considering the hardships that she had to endure, but made stronger by them. She is very convincing as a blind person (Another note: Katsu and Kitano both played Zatoichi with their eyes mostly closed. Ayase plays Ichi with her eyes open). The developing friendship with Toma is played out very well. She starts out as tolerating him, and treating him with contempt, but later becomes his friend. The two share a couple moments that are quite touching.

Most films of this genre seem to have some type of comic relief. Most of this is provided by, or at the expense of Toma. The reason for him not being able to draw his sword is shown in flashbacks, and is quite tragic, but this inability is often played to comedic effect. Also, one of the other characters frequently changes his name to “Ton-ma”, a slight mispronunciation that means “dim witted”, which amusingly flusters him. Takao Osawa gives a strong performance in this role. Though a skilled fighter, his inability to draw humbles him, and the shame and frustration is evident. He does a great job portraying the arc from being sort of buffoonish to becoming a hero.
The villains are almost cartoonish, yet suitably deranged, frequently laughing maniacally, at inappropriate times. Banki (Shido Nakamura - Letters from Iwo JIma) a former Samurai, who was so disfigured from a battle, that he was expelled from his clan, wears a mask, and kills anyone who sees him without it. He was a good villain, but I always got the feeling that he'd be better suited for a '70's Kung Fu movie. I was occasionally distracted, because his main henchman (played by Takeuchi Riki, who apparently makes a living off of playing totally unhinged characters) looked like Wayne Newton, and several others look like Elvis impersonators.

The main issue I have with it is that it was dubbed into English. Most of that was done pretty well, with most of the voices being seamless. However, a couple voices do sound like those from the aforementioned Kung Fu movies. I suspect that this may be because the actors are trying to imitate the rhythm of the Japanese language.

The film moves rather slowly, at times, and could've been a good deal shorter. However, it makes up for that by having a sword fight about every 15 minutes, with multiple combatants, and a battle between the villagers and the bandits. If you choose to watch, notice the unique way Ichi holds her sword (shown in the trailer below). I did have a problem with Ichi being a secondary character for about a quarter of the film, unable to do much, after losing a brutal duel. This is done to allow Toma to redeem himself, through heroic actions, that result from her captivity.

Flashbacks are put to great use, to explain Ichi and Toma's backstories, though there was additional exposition. The two could've been combined, in some instances, to help with pacing. Ichi’s flashbacks first show how she was rescued, then trained by Zatoichi. In a matter of minutes, they effectively establish the relationship between the two. They also show her life with the other Goze, her training with Zatoichi, and the reason for her expulsion. Toma’s shows the tragedy that prevents him from drawing his weapon.


While not a masterpiece, it is quite enjoyable, this was actually my second viewing. If you enjoy this, or not, or choose not to not even watch, I recommend the classic Zatoichi films, which may eventually  get their own posts. There are several available, for free, on Hulu.

Ichi’s original language Japanese, but is dubbed in English (I originally saw it with subtitles). It is Rated-R, with a run time of 1 hour, 58 minutes, and is available on Netflix, and Amazon Instant.

I give if 3, out of four cane swords.

Chawz, in Which Pigs Get Some Sweet, Sweet Revenge 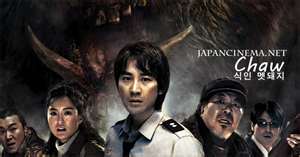 Jaws, and a select few other monster movies, was very effective because for much of the film, the shark was never seen, leaving much to the imagination. The Andy Griffith Show was great because it was about a competent Sheriff surrounded by small town eccentrics. Chawz, a South Korean (I'm not sure if there's any other kind of Korean film) film that effectively borrows more than a few elements from both of those classics, as well as others (Roger Corman productions, Predator).


This film is about a rural Korean village, Sam-Re-Me, that dubs itself "The village without crime", that has a series of animal attacks. It so happens that at the same time the town is promoting itself to bring in tourists to harvest their "organic" crops. As in Jaws, town leaders want the attacks covered up. I'm going to continue under the assumption that anyone reading this has seen Jaws, so "as in Jaws" should be implied whenever an element of the plot is mentioned (in case you've never seen Jaws, go here). At about this time, Officer Kim Kang-Soo is transferred to town, from Seoul. He wound up there, because as a joke, he wrote "anywhere" on a transfer request. He moves there with his wife, and somewhat eccentric, possibly demented, mother. He is what I'd consider the Andy Griffith character in this film. With the exception of Kim, and Inspector Shin (who never removes his sunglasses), the rest of the police force, including the Captain are Barney Fife types.

After the boar attacks a celebration at the town hall, an expedition is formed to track it down. The party is led by two big game hunters Chun Il-Man (a retired legend, and the grandfather of one of the victims) and Baek Man-Bae (the estranged, glory-seeking protégé of Chun). It also includes Byun Soo-Ryun, a Biologist, as well as Kim, and Shin. Kim's mother even tags along for a while. Once they get into the mountains, events occur that turn them from being the hunters, to the hunted.

There are several attempts to kill it, which of course fail. There rea couple of long chases, where it chases our protagonists. The climax, and epilogue are reminiscent of other creature features, but different enough to be unique. Stick around until the credits roll, there is an amusing extra scene.

I thoroughly enjoyed this film. There is quite a bit of humor in almost every scene, making it a great black comedy. Most of the characters are pretty well fleshed-out, and interesting. The eccentric villagers, even one who randomly appears, seemingly, just for the sake of weirdness, are all thoroughly so.

The effects, even the CGI pigs, are all quite effective. There is a more than sufficient amount of carnage, and most of the attacks, where the boar makes a kill, leave much to the imagination. It is also beautifully shot, and there is excellent character interaction.

This film does seem to have a couple messages, though not heavily played. A suspected origin of the mutant pigs is that they resulted from experiments performed by the Japanese military during World War II. This continues a theme that I've noticed in many Asian films, from countries that were occupied by Japan. They often take subtle jabs at that nation, as causing the problem, as is the case here, or as villains, as in a couple of Bruce Lee's films. Also, Byun suggests that the pigs have come down from the mountains because of deforesting done for farming. One could also interpret the attempts to cover up the attacks as a jab at corruption.

This is a great film, in which couldn't find any major flaws, or annoyances. The dialogue is in Korean, with subtitles. It is Rated-R (language and violence), and run time is 2 hours, 1 minute, and is available on Netflix Instant.

I give it four, out of four, mutant pigs.