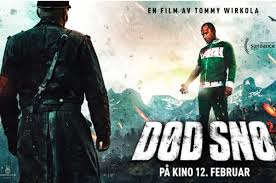 If I had the financing, or creativity, or technical ability, or attention span, I would make Nazi zombie movie. Nazis and zombies (as has been mentioned here before) are perfect antagonists, because of their relentlessness. Very few films have been made that have combined the two, which may not necessarily be a bad thing. At this point in time, it seems that pop culture has probably reached Peak Zombie. There are a multitude of movies that have been made, and books published, about zombies, so much so to the point that they are hard to escape. While zombies have long been my favorite monsters, frankly, I'm almost sick of them. Not only are people constantly talking about a zombie apocalypse, which at one point was an interesting exercise, but has become tiresome.

One benefit about there being so few movies that have combined zombies and Nazis is that it allows for the freedom to break free of the typical Outbreak/Attack - Siege - Escape formula, and to play with the rules of the sub-genre, which is done in this film. Not only have few of this type of film been made, they have historically not lived up to their potential.  Norway's Dead Snow was the first to fulfill the promise of the combination. Dead Snow 2: Red vs. Dead (RVD, not to be confused with professional wrestler Rob Van Dam), this time an American-Norwegian co-production, continues the story.

RVD picks up right where the original left off, with Martin, the sole survivor, escaping from the zombie horde, after he and some friends had stumbled upon their treasure. After crashing his car during the getaway, Martin wakes up in a hospital, to find that he is under arrest as a suspect in the death of his friends (he did accidentally kill his girlfriend). As usual, the cops, who are wonderfully inept, don't believe his zombie alibi, and treat him as a suspect. In addition to being under arrest, he finds that the doctors, thinking that they had reattached his arm (which he had sawed off in the original), actually had attached the zombie arm of Major Herzog, the leader of the Nazi zombies, which had been ripped off during his escape.

The new arm has super strength, but still acts as if it's controlled by its previous owner. It does help him escape from the hospital and police, but leaves a trail of death and destruction in its wake, because it does what it needs to in order to survive.

Martin finds that the Nazis, even after having recovered all of their treasure, are still on a rampage. He discovers that Herzog and his horde (which has grown inexplicably from the original) are still around because they are seeking to fulfill a mission that Hitler had given them: to exterminate a nearby village, in retaliation for some anti-Nazi sabotage committed during the war.

Along the way, acquires allies of varying abilities, Glenn, a museum employee,  and the self-styled Zombie Squad, a trio of nerdy American siblings who've been waiting and preparing for the zombie invasion that popular media has taught them will surely come. Between discovering Herzog's mission and gaining his allies, Martin discovers that Herzog can reanimate bodies, which helps him in acquiring new minions. This new discovery helps him and his team hatch a plan for stopping the zombies: to reanimate some Soviet prisoners (who had been murdered by Herzog), in order to get them to fight the Nazis.

After Martin reanimates the Soviets, he and his team join together in battle against the zombies, and as required, they are triumphant.

Not only is this a fantastic sequel, it is a great movie in its own right. The effects are quite effective, even to the point of Herzog and other zombies being able to demonstrate facial expressions, which allows for some comedic effect, as they respond to surrounding events. The Nazi uniforms appear to be quite authentic and accurate, and they even have a Panzer!

There is a lot of gore, much of it used for comic effect (entrails used for siphoning fuel from a bus, to fuel the Panzer). However, be warned that the zombies, in line with their evil nature, kill everyone in their path, including men, women, and children.


There are a lot of comic elements in RVD. The cops are completely unprepared, and the Chief is completely inept. In addition to he and his force being small town, they have watched way to many American cop shows/films, resulting in them overestimating their abilities, leading to much misadventure.

Initially inept, Martin's team, between their introduction, and becoming heroes, provide some comedy as well. Particularly amusing is Sidekick Zombie (that's how he's listed in the credits), the first zombie reanimated by Martin, who is subjected to a lot of abuse, and follows him around like a puppy.

Honestly, I only have two issues with this film. First, after all of the buildup, the titular Reds have woefully little screen time. Second, The Zombie Squad, intentionally or not, is extremely annoying.


I can't recommend this film too highly. It is a really fun movie, that moves along at a fairly rapid pace, with few slow moments. There is a lot of humor, most of which hits the mark. Also, bonus points for historical accuracy. Herzog's group is identified as being Einsatz Grupen, which were actual Nazi death squads.


While there are two versions of this film, one in English, and the other in Norwegian, with subtitles (a small loophole), I watched the former.

Content Warnings: There is quite a bit of profanity and gore.

Dead Snow 2: Red vs. Dead is available on Netflix, Amazon Instant, and other streaming services.

I give it 5 out of 5 reanimated zombies.

Note: Stick around until after the credits.

My Thoughts on The Saw Series 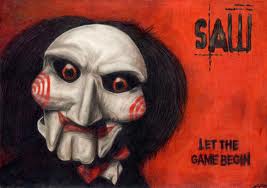 Note: This post is a slight detour from the usual content, not a change in its mission.
Up until this week, I have avoided the Saw series. I had done so because of it generally being classified as "torture porn". Human beings suffering (real or pretend) for entertainment purposes has never appealed to me.
While I had seen the original, and found it to be an interesting and original concept, I really had no interest in seeing more of it. Quite obviously, multitudes of others felt differently. Their opinions were strong enough to result in *six* sequels.
Why did I finally give in? First, the series, for good or ill, has become embedded in our culture. There have been parodies of it (Scary Movie), frequent references to it in our culture, and it has a regular presence in haunted houses. Secondly, I-V were on Netflix, and I could watch out of the corner of my eye, while doing other things..
I like suspenseful movies, and the first installment of the series fit that description. What can be more suspenseful than one's ability to solve a puzzle being a matter of life or death? Not much.
This series does have plenty of puzzles, in the form of Rube Goldberg-type death machines. Unfortunately, most of them, even if the person is able to solve one, mutilates them irreparably. The alleged reason for people being placed in the "games" is to teach them to place a greater value on their lives, by testing their will to survive, or to "rehabilitate" them.

Maybe I'm not as smart as I consider myself to be, but I just can't figure out how permanently disabling someone can help them become a better person.
Additionally, even if someone does "win" the game, they seem to die more often than they don't. Many of the games are designed to be unwinnable, with ridiculously short times to solve them, and necessary appendages being rendered unusable for completion. That's just sadistic.
Jigsaw frequently mentions "redemption". How can anyone be redeemed when they die, even after the "win"? It's just damn depressing.
I'm a fairly open-minded person, and had been dubious of critics' hand wringing and clutching of pearls over this series being "torture porn". After watching the series, I have to acknowledge that they have a valid point..
In addition to the mentioned sadism, the supposed offenses of the victims are seriously out of proportion with their challenges/punishment. The popularity of this series, to me anyway, seems to be based on the brutal maiming and killing of characters, and the resulting gore.
Does that make the people who enjoy these movies bad people? No, not necessarily, we all need our escapes, but life can be so depressing anyway, how are they helpful? Besides, I don't recall ever hearing of anyone trying to reenact any of the scenarios from the films.
Is the popularity of these films a sign of the decline of our culture and moral rot? Maybe, I don't know, though I'm pretty doubtful that they're helpful.
Are the movies all bad? No, there's actually quite a bit to like. First, the casting is quite great, including Cary Elwes, Dina Meyer, Michael Emerson, Danny Glover, Shawnee Smith (hubba, hubba), Donnie Wahlerg, Beverly Mitchell, Glenn Plummer, Costas Mandylor, Angus MacFadyen, and Julie Benz, among others. While it does remind me of an episode of The Love Boat or Fantasy Island, loaded with actors who were either still trying to make a name for themselves and those who had already peaked, it's still quite good.


That leaves Tobin Bell, as the titular character. He does a particularly good job in the role, especially in the flashbacks, which show why and how he became Jigsaw, and make up a large part of the films. Not that we need to know a killer's (he insists that he isn't one) motivations, the flashbacks showing them were the most interesting parts to me.


Another impressive thing for me is the continuity, if that's the right word. Watching the films back-to-back, like I did, they flow almost seamlessly together. Also, many of the events in different parts of the series happen concurrently, with only one time where I noticed that didn't quite make sense.
Finally, the production was interesting. According to IMDB, most of the films were made in single buildings, and outside of the elaborate death traps, are basically minimalist. As disgusting as the end results were, the design of those machines were quite impressive.
Do not watch these if you are squeamish or eating. There is a lot of gore, some nudity, and a lot of language.
While I can't and won't recommend them, and don't really see any redeeming value, I give them 3 out of 5 ridiculous Rube Goldberg torture devices.

Note: this will be updated if I ever finish the series.


This refers to the first film, but it's pretty typical of the others.