I blame John Belushi (those from Gen-Whatever-Comes-After-X may need to look him up). His Samurai Warrior character on Saturday Night Live (back when it used to be funny) made me curious about Samurai movies, which grew into a love of most things Samurai. So, it’s fitting that my first post will be about a Samurai movie. 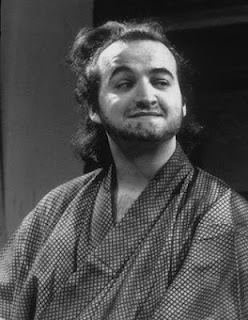 The movie in question is 13 Assassins, a 2010 film, directed by Takashi Miike. It’s set during a time of peace in 1800s Feudal Japan. A cruel young Lord Naritsuga rapes and kills at will (the only troubling scenes in the film demonstrate this), since he’s the son of a former Shogun, and the brother of the current one. At the beginning of the film, he is poised to make political moves that will make him even more powerful. Seeing the danger of this, Sir Doi, a senior government official hires Shinzaemon to assassinate Naritsuga. Shinzaemon then recruits 11 more of the most trustworthy and strongest Samurai that, whom Sir Doi knows his nephew Shinroukuro. The 12 plan to ambush Naritsugu on his long journey home from Edo. Along the way, they get lost while travelling through the mountains and a hermit guides them to their destination, and becomes the thirteenth member of their group. They then take the village over and convert it into a labyrinthine mousetrap with many camouflaged fortifications, and wait for Naritsuga. That is where the climatic battle happens.

This is a film of contrasts, there is good and evil, with no in-between. The heroes, Shinzaemon and his men are men of honor, willing to do what is right, knowing that they might not survive. This is a theme that like Western’s, runs through most Samurai movies. In a way, this movie is like Seven Samurai, and The Magnificent Seven. The villain, Naritsuga, has absolutely no redeeming value, he is amoral and cruel, making his foes that much more effective. The only thing missing from that character is a Snidley Whiplash (look it up) mustache, for him to twirl. The only possible gray character is Hanbei, Naritsuga’s right-hand man. He expresses doubts about his lord, but in the end he is a Samurai, and bound to serve his master. The end for these three characters is quite effective.

I had been wary about this movie, because of Miike’s reputation for making disturbing films. I had tried to watch his film Ichi The Killer, but had to quit about 10 minutes into it. The dude blowing cigarette smoke out of the slits cut in his cheeks was too much for me. So, I was understandably concerned that this would be a gratuitously gory film. In spite of the high body count (over 200 people die in the final act), it has very little blood. There were a couple somewhat disturbing scenes: Naritsuga’s off-screen rape and murder of a subject’s wife, him murdering a child (shooting him with an arrow), and when Shinzaemon is shown a woman whose limbs had been amputated by him. I watched this movie a few months ago, so I’ve had time to digest it. In every aspect, it is a very well-made, and I found it very enjoyable. All of the characters are well-developed and for a more recent reference, the final battle is reminiscent of the one in 300.
I give 13 Assassins 4 out of 5 Top Knots.
You can watch it instantly on Netflix.