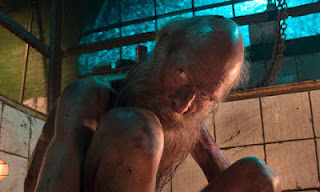 Happy elves, big fat jolly Santa, flying reindeer, family get togethers; these are all Christmas movie traditions you will not see in the Finnish movie Rare Exports: A Christmas Tale.  Think of Rare Exports as the Redneck Scandinavian version of Christmas movies if Redneck Scandinavian movies consisted of a demon Santa Claus, hundreds of wraith-like geriatric elves and slaughter, slaughter, and more slaughter.
The film begins with a group of scientists making a big freaking dig on the top of a cone like mountain deep in the Northern woods of Finland.  Two boys from a village of Reindeer herders go to investigate.  One of the boys, Pietari, played by Onni Tommila, isn’t convinced that these are miners or mere scientists.  He believes that these men are digging in the World’s largest burial mound, the burial mound of Santa Claus.  Pietari tries to tell his friend that Santa is not nice at all but a demon of lore that kidnaps children and tortures them for not being good.  He goes on to describe how many centuries ago the villagers there trapped Santa in ice and buried him under the mountain.   Yeah, this ain’t Miracle on 42nd Street.  Pietari tries to warn his father Rauno, played by Jorma Tommila.  Rauno is a distraught widower and has no time for Pietari’s foolishness.     Pietari takes matters into his own hands and suits up in full hockey gear including a heavily patted bottom.
Strange noises are heard atop the mountain one night and Rauno and the other herders awake to find all of their herd slaughtered.  They are pissed and decide to go confront the scientists but when they get to the top of the mountain they find a bottomless giant empty hole and zero scientists.  Pietari is really worried at this point and really tries to warn his Dad. No Dice.  The next day is where it gets real.  Rauno and Pietari find that something has sprung their wolf fall trap.  They search the spike lined opening to find a white bearded skinny naked old man.  They bring the body to Rauno’s slaughterhouse to find out who the identity of this man.  Two other Reindeer herders come over to see what happened.  They know that the Wolf trap is illegal and of course their only option is to chop up the old man so no one finds out.  Yeah, I solve most of my problems in slaughterhouses too. What the hell?!  Before they can chop up the guy, he comes to life.  He never speaks but he has a keen interest in little Pietari.  Convinced that this is Santa Claus they trap him and try to ransom him to the scientists.  When the scientist appears he tells them that this isn’t Santa Claus but one of his many hundred elves.   You’ll have to watch to find out who Santa is.
This movie really keeps you on the edge of your seat.  Obviously not your typical Christmas movie, but it’s not your typical horror movie either.  It leaves a lot up to the imagination.  The special effects were good and believable.  I particularly enjoyed Jorma Tommila’s performance and the interactions he has with Onni.  You could really feel the pain that Rauno felt having to spend another Christmas without his wife and having to care for his son.
Craig and I thought that this should be required Christmas viewing.  I swear your kids will not try to see Santa after they watch this movie.
I heartily give this 4 out of 5 slaughtered reindeer!
Rare Exports can be watched instantly on Netflix.