Iron Sky (or How Politics Ruined A Foolproof Concept) 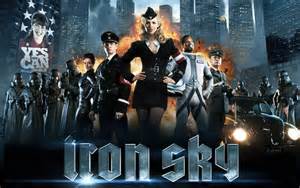 This is not an overtly political blog. Genre movies should not have overtly political messages,  and if there is one, it should be subtle enough that the viewer does not notice it until long after it is over. Yes, Matt and I are conservatives, and fair or not, that affects the way we view movies. That being said, the following review is a political screed, and I would promise that it won’t happen again, but I don’t want to make myself into a liar later on.

Nazis. On. The. Moon. What a perfect, foolproof idea! Nazis are the gift that just keep giving. They were so diabolical that they make the perfect villain. In a world that many want to view as having many shades of grey, they were pure evil. They were also secretive, and they controlled so much of Europe, that new things are constantly being discovered about them, and there are some things that the world may never know. That is the basis of Iron Sky, that towards the end of the war, a group of Nazis escaped to the moon, and built a secret base, with plans to one day return to the Earth and conquer it. That is just a great freaking idea.

Unfortunately, the people behind the film blew it. As I mentioned before, if a genre film, heck, any type if film, has a message, it should be subtle enough that if someone wants to think back over their viewing, they might realize the message on their own, and easily put it out of their mind, if they so choose. If a film has an overt message, it can offend viewers, who relate their displeasure to their friends and family, who in turn may choose not to see the film. The latter route is the one that Iron Sky chose to take.

Their mistake, as far as whatever my opinion is worth, was to blatantly mock Sarah Palin. The first time you see the character based on her, she’s working out on a stair climber, in the Oval Office, dressed similarly to the famous Runner’s World cover: 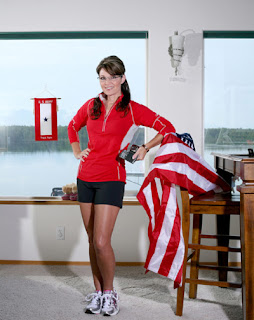 Anyway, the character is portrayed as Palin often is, as something of a shallow ditz. The basic plot, or what I gathered from as much as I could bear to watch, was that for her reelection, she chose, or her staff directed her to choose (because they’re her puppet masters dontcha’ know) an ethnic male model, to attract certain voter blocs. He is then sent on a mission to the moon, where he stumbles upon the Nazi base, and is captured. That’s about as far as I got.

I quit watching when the Palin character was introduced. Lampooning her in such a blatant way irritated me, to the point that I couldn’t focus on the movie any longer. I wasn’t annoyed by the simple fact they mocked her. Every pubic figure has aspects of their personality that are fair game to be mocked. The problem I had was the fact that they were lazy about it. All they basically did with the character was copy a Saturday Night Live skit, where they made her look dumb. Whether you are a fan of Palin’s, or not, that is just plain lazy, and you should be offended by that.

The reason that you should be offended is that the writers didn’t think any more of their target audience than to throw a caricature at you. There should be no sacred cows in satire, but for the love of Pete, if you’re going to mock someone, be creative about it. A personal example: I’m a native Southerner, and for my entire life, we’ve been mocked as dumb, inbred rednecks. Anyway, back in the ‘80s (I think) Dennis Miller refers to the South as “Darwin’s Waiting Room”. Was I offended? Heck no, I thought it was hilarious. Why? He actually put thought into his insult, which in an odd way showed respect for both the target, and the audience.

Wow, I got way off track there.

I tried to watch Iron Sky about five months ago, to do a review here. I quit watching between fifteen and thirty minutes into it, after the Palin character was introduced. I had totally put it out of my mind, until today. Whatever genius was running Netflix’s Twitter account decided that it would be a good idea to tweet this: 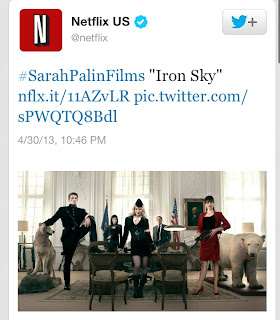 Wow, way to go, on the day that they announced that they were losing the Warner Brothers catalogue. Last year they lost Starz, and they may very well lose Viacom. Those titles just aren’t going away, they are going to competitors, and it is not a wise move to risk alienating probably about half of their subscribers, by directly linking Iron Sky to Palin.

Outside of politics, here’s my review of what I managed to see: It’s a B-Movie, albeit with pretty good production values. The acting is over-the-top, all the characters I saw were caricatures, and the dialogue was pretty terrible, as one should expect from such a film.

Do I recommend it? You’re kidding, right? I’m not even going to bother rating it, especially since I don’t remember enough about it to rate it on one of my quirky scales.

A production of Germany, Finland,  and Australia, Iron Sky is in English and German
Posted by Craig at 11:09 PM 7 comments