Be the Solution or Get the hell out of the Way! The Review of "Phase 7" 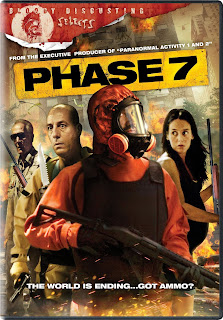 In life you are either the problem, the solution, or just in the damn way.  A microcosm of this is the apocalyptic movie Phase 7.  This Argentinean sci-fi takes place during the midst of an undetermined outbreak of a killer virus.  The protagonists is the hapless  30 something husband, Coco (David Hendler).  Coco and his wife Pipi, yes it’s pronounced pee pee so feel free to giggle, are clueless about the danger is around them by the time their own apartment complex is quarantined off.  As the situation starts to become more dire and supplies in the apartment complex become more valuable factions start to form within the complex.  An Elderly man on the first floor named Zanutto (Federico Luppi), who looks like a cross between Ricardo Montalbahn and Bob Barker,  seems to be coughing often and some of the neighbors want to take Zanutto and move him to another  apartment.

Coco ignores them and still insists on living his life like nothing has changed.  Coco’s neighbor, Horacio, is the real life embodiment of National Geographic’s Doomsday Preppers.  He has full body tox suits, years worth of food, and arsenal that would make Ted Nugent jealous, and the number one asset: Common Sense.  Horacio gives Coco a suit, food, even a pistol. Coco doesn’t want them and promises that if you call the police they will handle any situation.  Horacio tells the other neighbors to stay away from the fourth floor or it would be considered an act of war.  Coco ignores Horacio and tries to go reason with the other neighbors.  Well that is when the shit hits the fan.  Bob Barker’s Argentinean Doppleganger, Zanutto, flings open the door to the neighbors and proceeds to blow their heads literally off.  Yeah it’s kind of gruesome.  Coco figures out that this situation is not normal and needs to pull his shit together or Zanutto is going to blow is ass off.  Horacio and Coco rig the building with traps, which Coco triggers all himself because he’s a dumbass.  Zanutto has now officially flipped his shit and has killed almost everyone in the apartment complex.  Coco had better find his balls quick because Zanutto doesn’t flinch and Horacio may not be there to help him.
Overall I thought Phase 7 was a tad boring.  Although there were funny spots in it, such as when Coco shaved his beard and looks exactly like the lead singer of Moterhead.

The acting was real at times but at other times as in the scenes with Pipi, sorry giggling again, it just seemed to fake that this woman has no idea what’s going on until the very end of the movie.  In the end I was relieved it was over just because I grew tired of Coco’s whining.  I mean grow a pair, dude!  I give this movie 2 out of 5 Shouting Pipi’s. (Oh that never gets old.)
Country: Argentina; Language: Spanish; Runtime: 95 minutes